Did you know that Eggplant is an excellent source of dietary fiber. It’s a very good source of vitamins B1, B6 and potassium. It’s a good source of copper, magnesium, manganese, phosphorus, niacin, and folic acid. Nasunin, an anthocyanin from eggplant peels, is a potent antioxidant and free-radical scavenger, and has protective activity against lipid per oxidation. 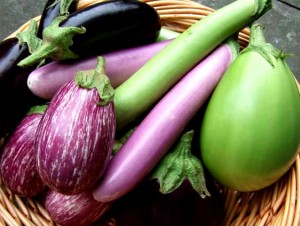 When used properly, eggplant can provide many health benefits, including being important in the treatment and prevention of cancer. Eggplant has been found to be especially useful in the treatment of colon cancer due to the high amount of fiber found within eggplant. Fiber is important in the treatment of colon cancer because it is a relatively porous nutrient, and because of this, as it moves through the digestive tract; it has the tendency to absorb toxins and chemicals that can lead to the development of colon cancer. For best results, individuals who are interested in reducing their risk for the development of color cancer should be sure to include the skin of the eggplant during consumption. Research has found that the skin of eggplant may contain more fiber that the actual eggplant itself.

Eggplant contains high amounts of fiber, making it a great food in the fight against cancer. But, the fiber found in eggplant has other uses–namely, its ability to be a useful tool for people who are trying to lose weight. Fiber is a relatively “bulky” food, meaning that is takes up a lot of room in the stomach. Therefore, by eating eggplant in a salad or appetizer before a meal, dieters are likely to have a greater feeling of satiety, and generally eat fewer calories (thereby achieving a substantial weight loss with time). In addition, fiber is slow digesting, and takes a long time to move from the stomach to the digestive tract. Because of this, the eggplant keeps dieters feeling full for a longer period of time–and therefore, they won’t be as tempted to snack between meals, which will again aid in weight loss.

Eggplant contains a high amount of water–and similarly, aside from fat and bone, our bodies are composed of almost primarily water. Water has important roles in a variety of pathways through the body, but has been found to be especially important in the maintenance of healthy skin and hair. Individuals who are dehydrated are more likely to exhibit hair that is thin, dry and has split ends, along with skin that appears to be flaky, dry, with a greater number of lines and wrinkles. Consuming adequate amount of water through either water itself or through food items such as eggplant can not only improve the quality of your hair and skin, but also the general performance of your body. For best results, eat the eggplant raw–research has found that cooking it removes some of the water that is so beneficial.