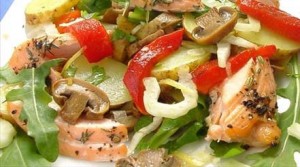 Make the vinaigrette: In a bowl, combine the vinegar, lemon juice, shallots, lemon zest and rosemary.Whisk in the olive oil and season with salt and pepper.

Make the wild salmon salad: Roast the bell peppers directly over a gas flame or under the broiler as close to the heat as possible until charred all over.

Transfer to a paper bag and let steam for 15 minutes.

Scrape off the blackened skins and discard the stems, ribs and seeds.

Cut the peppers into 1/3-inch-thick strips.

Put the sliced potatoes in a medium saucepan of salted water and bring to a boil.

Remove from the heat and let sit in the water until tender, about 18 minutes.

Drain and transfer to a plate.

Heat the olive oil in a medium skillet.

Add the mushrooms and cook over high heat, stirring occasionally, until softened, about 4 minutes.

Season with salt and pepper and transfer to a bowl.

Preheat the oven to 500°F Lay the salmon fillet, skinned side down, on a lightly-oiled baking sheet and remove any stray bones with tweezers.

Sprinkle the salmon with the thyme, fennel seeds and celery seeds; season with salt and black pepper.

Roast for about 10 minutes, until the salmon is opaque but still slightly rare in the centre.

Remove the salmon from the oven and preheat the broiler.

Broil for about 1 minute, or until the top is browned.

Break the salmon into large chunks.

In a large bowl, combine the arugula with the fennel, mushrooms, roasted red peppers, potatoes and cilantro.

Add 3/4s of the vinaigrette and toss.

Arrange the salad on large plates or shallow bowls and top with chunks of the salmon.

Drizzle the fish with the remaining vinaigrette and serve.