The Benefits of the Omega Juicer 8005

Omega Juicer 8005  is no different from any typical model upgrade. Replacing the now 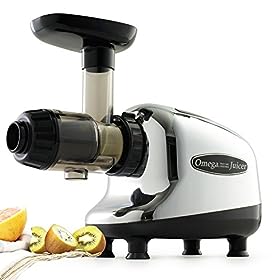 old 8002 juicer, this one comes with an assortment of new features and better productivity and is all poised to set the standards for the next generation of juicers.

To talk about the benefits of the Omega Juicer 8005, the first aspect that catches one’s eye is the relative ease with which it juices vegetables and fruits. Armed with a unique patented juicing technology – a single gear extraction coupled with a two stage juice extraction method – it handles with both veggies and fruits with ease, no matter whether it is carrots, celery, beets, peppers, grapes, apples, or radishes, or the hardest nut to crack amongst them all, citrus fruits. And it does all this without letting the final product drain in the nutritional quotient or natural essence. Freshness and full nutritional benefits are guaranteed to the final drop.

Another benefit of Omega Juicer 8005 is its included food processor setup. The device comes with a functionality to chop and mince garlic, ginger, red pepper, scallions, and most foods we use, including seasonings and herbs, again without destroying their natural essence or nutritional ingredients even one iota. For those who want to make soft food for babies or geriatric patients, Omega Juicer 8005 juicer provides just that. It is both fast and easy!

In fact, the benefits of the new Omega Juicer 8005 do not end there – it is also a pasta extruder and an inbuilt homogenizer. Home made breadsticks, spaghetti, and linguini can be extruded in no time through the pasta nostrils included, while the homogenizer functionality of the Omega 8005 juicer makes fresh frozen dessert preparation an easier job than sleeping (assuming you do not have sleep apnea).

And finally, Omega 8005 juicer also serves as an efficient grinder, good enough to grind things such as boneless meat, flour and coffee beans.

There are many other juicers on the market that offer some or all of the features of the new Omega 8005 juicer. But the latter stands apart from the rest in terms of its versatility, low rpm (80 rpm) that reduces heat and foaming, and fewer parts, which makes it easy to clean and repair when required. Further, the juicer carries out all of its functionalities with the same efficiency, unlike the other makes, which sometimes compromise one task for the other or vice versa. And above all, Omega 8005 Juicer comes with a ten year warranty, something unmatched by most of its market rivalsOmega 8005 Juicer’s customer support is also top notch.

Visit the home site for further info on Omega 8005 Juicer.

Get a Great Food Delivery Service