why you should train in a private personal training studio

(LifeWire) — Every gym has its share of grunters, groaners, heavy sweaters and hygiene queens. And then there are the aerobics assailants. 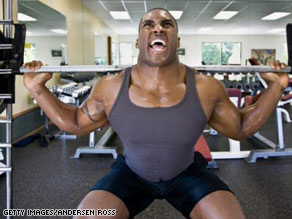 Really loud grunting and groaning can be disturbing to other people at the gym.

“I take a cardio class at my gym and the other day a first-timer came in and stood about six inches in front of me,” says Olivia Giovetti, 22, a Los Angeles administrative assistant. “I asked her to move forward, but she just ignored me. And when the workout started, she was all over me.”

Frustrated, Giovetti left. The following week, she secured a spot on the opposite side of the room, hoping to avoid the onslaught of arms and legs. It didn’t help.

“She made a beeline right for me,” says Giovetti. “She was grapevining into me, elbowing me. At one point she just flat-out pushed me. I’m like, ‘What’s going on? I’m just trying to work out here!'”

Then there’s the New York lawsuit involving a screaming spin class participant who was forcibly upended on his stationary bike by a classmate fed up with his loud grunts and shouts of “You go, girl!” In June, jurors acquitted the defendant, stockbroker Christopher Carter, of assault charges in that incident.

“They were chest to chest yelling at each other,” says Williams. “And by the time I finally got over there to break it up, they were wrestling. We eventually had to escort [one] guy out of the gym and cancel his membership.”

Michael Feigin, host of the New York radio show “Fitness Guru” and founder of Half Moon Pilates, says territorial fights are the most common problem he’s witnessed in his 20 years in the business.

“People get very caught up in territorial disputes,” he says. “If somebody takes ‘their’ bike or ‘their’ space, they’ll go off the charts in terms of their anger. In the first studio I opened, I had a bylaw in the brochure that said no one space belonged to any one individual. I put it on paper because that’s always such a huge dispute.”

Personal space is just the tip of the iceberg. Other irritants include oppressive body odor, excessive locker-room nudity, cardio caterwauling and those who serenade fellow exercisers with off-key howls.

“You’ll get people singing at the top of their lungs while they’re running on the treadmill,” says Feigin. “They don’t do it consciously; they’re just caught up in the energy. But it’s a problem when it crosses the line and impinges on other people.”

Cindy Lauren, a 53-year-old medical nonprofit director from Santa Monica, California, has a noise nightmare at her gym. The former competitive bodybuilder says one member sounds like she’s having sex every time she lifts weights.

“You can hear her everywhere,” she says. “She’ll have these little 5-pound weights and she’ll be going ‘Aaah, aaaaah, aaaaaaah!’ like she’s having an orgasm. The other members’ eye-rolling and face-making almost make it worth it, but it’s really irritating.”

What’s the best way to avoid an all-out gym war?

Williams says to let management handle disagreements, especially those with the potential to turn ugly.

“You have people who are full of testosterone or are taking supplements and already hyped up when they come in to work out,” he says. “When that mixes with an aggressive personality, you’ve got somebody who can easily get into an altercation. So if there’s a problem, it’s best to bring it to the attention of the people who work there. It’s part of their job to deal with this stuff; don’t try to tackle it yourself.”

But not all gyms will step in, says Giovetti, whose complaint about the aerobics assailant was met with indifference.

“I talked to gym management and they told me there was nothing they could do,” she says.

Many clubs take great pains to keep the peace, offering towels, spray disinfectant, and signage reminding members to clean up after themselves and limit their use of cardio machines during busy times.

Club One Fitness Center in San Francisco even posts notices about behavior in the locker room.

“We try to promote a code of etiquette,” says 28-year-old manager Karim Rahman. “We have signs asking people to limit their cell phone use and not use their camera phones in the locker room — just basic things to respect people’s privacy.”

But gyms are only partly responsible for a member’s happiness, says Pauline Wallin, a clinical psychologist from Camp Hill, Pennsylvania, and author of “Taming Your Inner Brat: A Guide for Transforming Self-Defeating Behavior.”

“There will always be people who are jerks — people who take their workout way too seriously and feel entitled to do whatever they want, whenever they want because they’ve paid their $29 a month,” she says. “It’s up to you whether you let it bother you or not. You can choose to join the jerk group, or to remain independent and happy.”

Want to avoid being a gym jerk or keep your sanity when others act up? Some simple rules:

• If your gym has a code of conduct, read and abide by it. If you’ve been breaking rules — screaming, cussing, forgetting to clean up, cutting in — apologize and move on. People are usually forgiving if you own up to bad behavior. If you see people breaking the rules but are leery of confronting them, tell management so they can do the heavy lifting.

• Always disinfect your equipment, and aim the spray carefully to avoid hitting your neighbor. If someone else fails to do this, don’t assume they’re inconsiderate; they may have forgotten.

• If someone’s making too much noise (grunting, screaming, singing), politely ask them to keep it down. If they refuse, take it to management or move to another part of the gym.

• Remember that you’re sharing space with hundreds of others. You may have a favorite bench or treadmill, but it’s not yours. Let someone share the machine with you by taking turns during your circuit of exercises and be conscious of time limits some gyms set on the use of equipment during peak hours.