4 year old Diana Nyad Swam for 100 plus miles from cuba to key west at 50 strokes per minute no shark cage and in roughly 53 hours. Diana burned somewhere around 32,000 calories roughly. The pure numbers alone should make your jaw drop. Not to mention swimming around shark infested waterswhich of 2 of only people have ever attempted this task none without a shark protection cage. 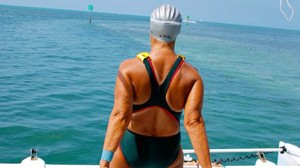 Diana accomplished something that seemed near impossible for herself and on top of it from a physiological standpoint she defied the odds of the human body.  Based on clinical research she accomplished a task where physiologically speaking her body should of had a drastic decline in the last few years from her early athletic years as a swimmer. The demands she put her body through would make most athletes craw up in a fetal position and cry though she was willing to fight and finally accomplish she has fought to achieve her entire life. I have listed many factors that she had to endure.

Diana’s mental conditioning is something that can not be measured with any equipment. This is why people at any age can accomplish amazing tasks. She not only has the mantra “Find a Way” She believes she could do it. She got close a few times so she knew physically she could do this since she had past experiences of getting very close. It’s unbelievable what she accomplished for any man or women. Being a 64 year old women makes it an even more amazing feat. Mental exhaustion is common with ultra endurance sports where you only have yourself and your mind to get you through 53 hours of shark infested waters with dangerous jelly fish, and all types of problematic weather conditions.

Diana Nyad has accomplished many ultra swimming marathon feats. She has consistently been swimming since she was 12. She has many world records under her belt when it comes to ultra endurance. Her conditioning is amazing for an ultra endurance athlete. The phrase the tortoise whens the race is what you want to think about when you think about ultra endurance these athletes typically are moving at a much slower pace then your shorter endurance or sprint type activities. This making it physiologically less demanding on the body. Based on the swim being 103 miles and her taking 53 hours to complete this she averages close to 2mph and 3.2 kph. Her primarily fuel source was adipose tissue (fat) making the energy demands much less. This reducing the muscle fatigue much greater then someone performing a much higher intensity activity . She burned roughly 32,000 calories on this swim. The many factors that you can’t take account for is her stress from the physical demands of the swim, the fear of sharks, jellyfish, weather, and many other factors. Will cause her cortisol levels to rise with the combination of her blood sugar being low from the physical exercise which these factors can cause great mental exhaustion and can lead to a lot of negative self talk.  The will to finish or to “find a way” was most likely what got her through this.

Drastic weather conditions with the possibility with hurricanes. The rough current and the swelling of her lips, her lungs swelling, and making it difficult to breathe. Other dangerous factors are shark infested waters dangerous jelly fish which she wore a mask and a suit to help protect her from these. Her team had a electrical impulse that helps detract sharks and apparently it worked well.

This story is a remarkable one with a 64 year old women never giving up on her dream to do something people deemed impossible. As she said “never give up on your dreams” and a mantra that help her achieve her dream was “Find a Way” so to anyone out their with a dream be inspired and to always believe in yourself no matter what your dream may be. If it’s just to lose some weight, eat better, or whatever it may be it goes to show you. You can do it!